In a transcendental step for its consolidation in the field of education, health and sports, the innovative learning system PSI.CO.M. landed during the last week in the world capital of technology, Silicon Valley, United States.

The renowned professor Carmelo Pittera, creator of this avant-garde method, together with his assistant, Agustín Ganly, dictated between the 1st and the 10th of March last the first training course of PSI.CO.M. at the Academy & Encore Volleyball Club, and the Lemo Foundation, from the city of Redwood City, in the state of California.

There were ten days of intensive theoretical and practical training, in which the eight methodologies that make up the educational system PSI.CO.M.

At the end of the course, the course certifications were given to the leaders Daniele Desiderio (director of the Academy & Encore Volleyball Club) and David “T” Taufoou (president of the Lemo Foundation).

Desiderio and “T” formed an alliance between the two institutions and created the “One Team” academy, which has more than 50 young teams of índoor volleyball and beach volleyball.

Professor Pittera, seconded by Ganly, gave the addresses to the eight technical directors responsible for more than 100 coaches of youth volleyball schools, for future implementation. 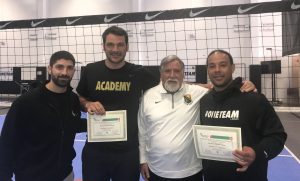 Agustín Ganly, Daniel Desiderio, Carmelo Pittera, and David “T” Taufoou (from left to right), in the delivery of the PSI.CO.M.

Two of the coaches responsible for the coaches of the academy are nothing more and nothing less than Jon Root, winner of the gold medal with the US Volleyball Team at the Olympic Games in Seoul 1988 and the assistant Marco Mencarelli (coach of different selected women’s volleyball Italians), Marco Paglialunga.

During the training on American soil, a total of five practices of PSI.CO.M. with the children of the volleyball schools, while, additionally, several specific training modules were made with PSI.CO.M content together with some youth teams of the club.

“The PSI.COM. it is a revolutionary method of learning. Thanks to Professor Pittera and his assistant Agustín Ganly for sharing their knowledge with us, “they highlighted in appreciation from the Academy & Encore Volleyball Club.

This event will most likely open the doors for future actions as a whole. At the same time, Professor Pittera, on behalf of the Foundation he represents, has chosen Daniele Desiderio as the PSICOM representative in the United States.

Pittera has been impressed by the structure of the Lemo Foundation and especially by the sensitivity and commitment to children shown by its president David “T” Taufoou.

All this could generate in the future a close collaboration between the Carmelo Pittera Foundation, chaired by Enrique Edelstein, and the president of the Lemo Foundation, David “T” Taufoou.